Over the years, I’ve worked with talented Data Scientist’s who’s backgrounds weren’t in typical quantitative disciplines, such as mathematics or statistics. I’ve had the privilege of assisting some of them to better understand the underlying mathematics behind many commonly used Machine Learning and Deep Learning algorithms.

This, along with the current growth in the popularity of Data Science, has made me realise that people will continue to transition from all sorts of disciplines, which means they may not have a strong grounding in mathematics.

With this motivation in mind, I decided to write an article that explains, from a mathematically intuitive perspective, one of the most fundamental concepts used in Machine Learning: Matrix Calculus.

With an abundance of Machine Learning libraries and packages available in tools such as R and Python, you can be almost completely oblivious to the underlying mathematics which powers most techniques and algorithms, such as Gradient Descent, Optimisation and Linear Regression.

A  solid understanding of the underlying mathematics, however, is fundamental in allowing you to:

I aim to discuss some key ideas and concepts, which are commonly used in the context of Machine Learning in order to help you get started. To further develop your knowledge, I encouraged you to read some of the numerous material available online, in text books or through courses. After all, the purpose of this article is not to be a reference manual or text book, but rather an introduction to some fundamental concepts from an intuitive perspective.

Fear of the Unknown

Pick up any book on Machine Learning, take a peek under any Deep Learning algorithm, and you’re likely to be bombarded by squiggly lines and Greek letters. This will either seem comforting to you or will result in sweats, swearing and complete dismay. If you fall into the latter group, then please read on, as I intend to shed some light on what inflicts terror in you!

Matrix calculus forms the foundations of so many Machine Learning techniques, and is the culmination of two fields of mathematics: 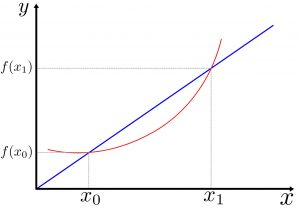 Understanding how a function behaves as a result of changes to its inputs is of great importance. In this case we have \(f\) as a function of \(x\) ie \(f(x)\). In order to understand how \(f\) behaves in different conditions, it would be good to know how any change in \(x\) will affect \(f\).

The slope can be defined as follows:

Now, in practice it’s much more useful to determine what the slope is at a ‘specific point’, as we are often interested in calculating the affect on \(f\) caused by changes in all values of \(x\), hence needing to know the slope for each value of \(x\).

To do this, we introduce the notion of a ‘derivative‘. A derivative can simply be defined as the slope at a specific point. The act of calculating the derivative is known as differentiation.

In order to calculate the slope at a single point, we must first insert an imaginary second point (as two points are required to calculate a slope), which we set at an ‘infinitesimally small’ distance away from \(x\). We’ll use \(\Delta x\) to denote this very tiny distance from \(x\), where \(\Delta\) represents ‘change in’. This will allow us to ‘estimate’ the slope from an arbitrarily small distance away. 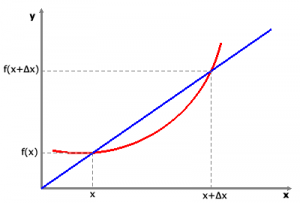 Intuitively, the limit is an estimate of the value of the function at a specific point. We’re basically saying if \(\Delta x = 0\), then what would the slope theoretically look like at \(x\), which is equivalent to the best prediction of the derivative at that point.

Derivatives can also be thought of as defining a ‘rate of change’ ie how much does \(y\) change for a change in \(t\), where \(t\) represents time and not distance, as is usually denoted by \(x\).

Note that the derivative of a function is also a function itself, which simply provides us with an expression that lets us determine the slope, or instantaneous rate of change, at any single point on a line.

A Point of Difference

Now that we’ve defined the concept of a derivative, what can we actually do with them?

First, some notation: When we discuss derivatives, we typically label the function we’re interested in measuring changes in as \(f(x)\). The derivative of \(f(x)\) with respect to \(x\) can be represented in four common ways:

There are a vast number of rules for differentiating different functions, but here are some basic and common ones:

One rule of derivatives that is of particular importance is the Chain Rule. The chain rule is used when we have a composition of functions, ie a function of a function/s. The composition is denoted either by \( f\left( g(x) \right)\) or by \( \left(f \circ g\right)(x) \). In this case we have a ‘chaining’ process of functions, whereby the output of one function, \( g(x) \), the inner function, becomes the input to another function \( f(x) \), the outer function.

The Chain Rule for differentiating a composite function is given by

The Chain Rule is fundamental to the Gradient Descent algorithm, which is key to understanding how to implement an Artificial Neural Network.

All these rules and definitions we’ve defined are well and good, when we are using them for functions of only one parameter, but what about when our function depends on multiple parameters as is often the case?

To handle such situations, we turn to multivariate (multivariable) calculus which simply extends the above concepts to functions of more than one variable.

The Calculus of Multiples

In doing so, we are calculating the partial derivatives of \( f \), or ‘partials’, as each one forms a ‘part’ of the total answer.

To denote the fact we’re working with partials, and not ordinary derivatives, the notation we use is slightly different. Instead of \( d \) we use the symbol \( \partial \).

The Chain Rule derivative of \(f\) with respect to \(t\) is defined as follows:

Note the mix of notation used based on whether the variable we’re differentiating is a function of one variable or two. Also note that the contributions of the partials, \(x\) and \(y\), are ADDED to form the total and not multiplied.

The Total Derivative of \(f\) is then defined as follows, and is calculated by simply multiplying both sides by \(dt\):

To answer this, let’s take a brief detour and discuss mathematical modelling…

Historically, mathematicians (and statisticians, physicists, biologists, engineers, economists etc) have wanted to try understand the ‘real world’ and to represent the concepts in a universally known language. To do so, they came up with the notion of a mathematical model, ie a representation of the process using the language of mathematics, by writing equations to describe physical (or theoretical) processes.

This has the power of abstracting complex concepts into simpler forms, providing insight and allowing us to predict, perform what-if analysis, etc.

To do so, we commonly need to consider the concept of rates of change of a quantity, ie how a change in input variables affects a change in the output. This can include a rate of change in one variable in relation to distance, time, etc.

So what we do is define the problem in terms of these changes. This is easy as we now have a way to describe this mathematically (via derivatives!). We then need to ‘solve’ the equation in order to determine an expression for \( T \) (solving differential equations is a topic for another article). Typically, with the complexity of models we create these days to describe real-world systems, we need to solve the equations numerically, using computational power. Simpler models however can be solved mathematically to give an explicit expression for \( T \), for instance. Regardless, without the concept of derivatives, none of this would be possible!

Now that we know how to calculate the partials for a multivariate function, what can we actually do with them? To answer this, we need to first jump over to the land of Linear Algebra and discuss vectors and matrices. They are the structures that we’ll store our data in, before applying the above operations to, in order to do powerful things like perform Gradient Descent and Linear Regression.

In most tools that we use to solve real world problems (R, Python, SQL, SAS, Excel, etc), we store the data in a 2D arrays, such as dataframes and tables. This is mathematically represented as a ‘matrix’.

A matrix is simply a rectangular array of numbers, arranged in rows and columns. This is just a general way of how we normally think of information stored in this way, ie with the rows representing records and the columns representing features/variables:

Below is a list of some common special cases and operations of matrices:

One important operation to be aware of is how to multiply two matrices together:

As an aside, GPU’s are highly efficient at performing matrix calculus, hence their use in Deep Learning where the number of layers, hence matrix calculations and manipulations, can number in the millions.

A vector is just a subset of a matrix. Specifically, it’s a matrix of only one column. They are typically denoted in lower case bold font, ie \(\mathbf v\):

When we talk about numbers in relation to vectors, such as multiplying a vector by a (real) number to get another vector, we refer to these numbers as scalars. Formally, when defining vectors and scalars, we really should discuss fields and vector spaces, but we’ll leave that for the astute reader to pursue further for mathematical completeness.

NB: when working with vectors, we typically represent them as column (vertical) vectors. To represent a vector horizontally, ie as a row, we simply transpose the vector.

An important operation for vectors, worth being aware of, is the dot product, which allows us to multiply two vectors together. It’s defined as follows:

When calculating partials in the world of vector calculus, we need to introduce the concept of a gradient vector, and denote it by the del (or nabla) symbol, \( \nabla \).

The purpose of the gradient is to store all the partials of a function into one vector so we can use it for performing operations and calculations in vector calculus land.

For instance, if we have a function \( f(x,y) \) of two variables, then it’s gradient is defined as follows:

Note that the gradient always points in the direction of greatest increase of a function ie the direction of steepest ascent, and it is zero at a local maximum or minimum. These are important points to keep in mind when trying to understand Gradient Descent and other algorithms.

The Chain Rule for vectors has the same structure as that for scalars:

Note that order is important as the product is not commutative.

If gradient vectors allow us to store all the partials for one function into a vector, what do we do when we have multiple functions?

Each row of the Jacobian matrix simply contains all the partials for that function. Here we’ve used the numerator layout. The transpose of this is known as the denominator layout, so always make sure you’re consistent, and understand which layout any reference material is using.

Here is a list of Jacobian shapes, worth keeping note of, for some common derivatives:

Below are the all important Chain Rules for common scalar by matrix derivatives:

whereby the above chain rule has been applied to the interim derivative of \(\frac{\partial g}{\partial \mathbf X}\).

You should now have a tool bag ready to take with you on your journey in Machine Learning. When you next lift the lid on a model, or peek inside the inner workings of an algorithm, you will have a better understanding of the moving parts, allowing you to delve deeper and acquire more tools as you need them.

To test your understanding, fill any gaps you may still have, and learn how Matrix Calculus is used in Deep Learning specifically, see this excellent paper.