I recently discussed how Confidential Computing allows us to analyse and use data without actually seeing it.

A key component of Confidential Computing is Privacy-Preserving Record Linkage (PPRL), and one of the most widely used techniques within PPRL is the Bloom Filter (BF), which is the focus of this post.

The aim is to give an overview of BFs, the role they play in PPRL and whether or not they’re as secure as many believe.

But before we dive into the world of BFs, we must first discuss the beauty of Hashing… 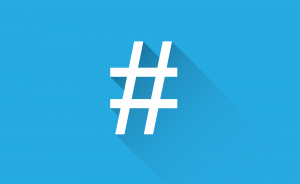 Cryptographic Hash Functions are one-way functions (mathematical algorithms) that map an input string, of arbitrary size, to (typically) a smaller and fixed size output (hash value). Basically, they’re a ‘fingerprint’ of the input data, as they uniquely identify it.

Being one-way means that they are practically impossible to invert, ie you can’t retrieve the original value given the hashed value. In addition, other properties that a hash function must meet include:

Hash functions, in general, are used widely in such areas as indexing databases (to speed up search) and password verification.

Given that they produce a fixed-length output, hash ‘collisions’ are technically possible ie when two different inputs produce the same hash value. One possible way around this issue is to use hash algorithms that produce longer hash values.

Numerous cryptographic hash algorithms exist, and some of the most popular are SHA and MD5. SHA-256, for instance, produces a 256-bit hash, thus making it very unlikely for collisions to occur.

As an example, here’s the hash generated for https://impartiallyderivative.com/ by SHA-256:

The Bloom Filter was invented by Burton Howard Bloom in 1970. It was basically designed to efficiently represent sets, and to test membership of an item in a set. Structurally, it’s simply a bit array.

They are based on hash functions, and hence are probabilistic data structures, with the important property of being space efficient.

There are two operations you can perform on a BF:

In regards to querying the set, BFs are unique in that:

So, how do they work?

The basic algorithm is as follows:

We begin by initialising the BF to 0: 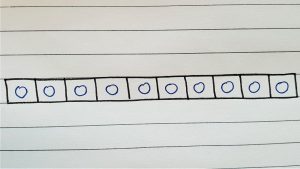 We then wish to add an element to the BF, say “horse”. To do this, we pass it to both hash functions, which return the following bit positions: 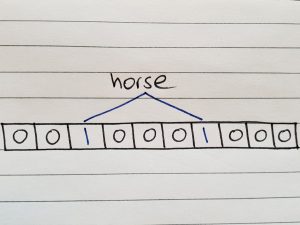 We next wish to add another element, say “chicken”. The two hash functions return the following bit positions: 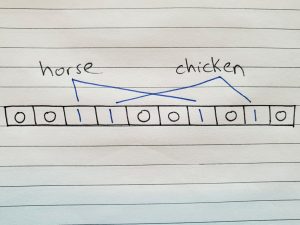 As we can see, these positions are still \(0\), so we can conclusively say that “dog” is NOT contained. 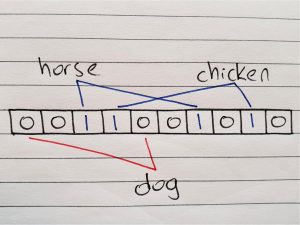 But what if we query “goat”, which hashes to the following positions? 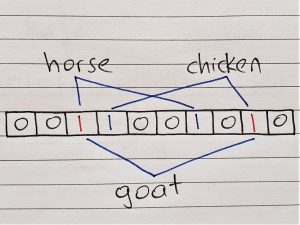 As we can see, the query will return Yes, as both positions are set to \(1\), even though “goat” is not contained in the BF. This is an example of a ‘collision’ (shown in red) and has resulted in a False Positive (FP)!

So, what can we do about dealing with collisions in BFs?

We can also adjust the number of hash functions we use.

Fortunately, there’s a formula that represents the relationship:

The optimal number of hash functions, \(k\), can be shown to equal:

You may have noticed that one thing we haven’t discussed is what if we want to remove an element from a BF?

The reason is that False Negatives are not permitted.

Consider for instance if we wanted to remove “goat” from our above example, which hashed to positions \(3\) and \(9\). We could simply set these values back to \(0\) correct?

Remember that “horse” mapped to position \(3\) and “chicken” to position \(9\), so this would mean that we’d be deleting them too!

However, there are structures that contain all the best parts of a BF but also allow removal: Counting Bloom Filters.

With Counting Bloom Filters (CBF), instead of storing single bit values, we instead store integer values ie a CBF is an integer vector.

The trade-off with CBFs vs BFs is increased size.

We now know a bit about BFs, and how they’re based on hash functions. So how do they help with Privacy-Preserving Record Linkage?

The aim of PPRL is to find records that represent the same entity in separate data stores, most commonly databases, without revealing the identity of the entities. They rely on balancing linkage quality with privacy.

There are numerous methods for encoding records into BFs, but the general process is as follows:

Let’s now see how this works by the following example:

Consider two names, “gerhard” and “gerrard” that we wish to encode in BFs, and then compare their similarity to see how well they match. Here’s the process, with an illustration below (with collisions indicated in red): 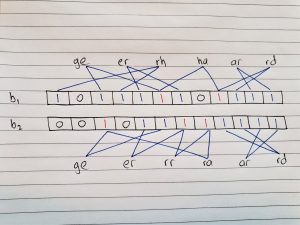 The degree of the match is strong, as expected, given the high number of common bigrams between the two BFs.

As an aside, remember CBFs… Well, they can be used for matching across multiple databases.

It’s Not All Roses

Even though BFs are currently being used in practical applications of PPRL, and offer some true benefits, they do have their limits. Most notably, they are vulnerable to attacks!

A common set of attacks, known as frequency attacks, aim to re-identify encoded values from sets of BFs by exploiting the fact that the frequencies of values in an encoded database can be matched to frequent plaint-text values, such as names. These attacks simply use the Hamming weight, ie the number of 1-bits of a BF, to define the frequencies.

In order to improve the security of BFs, Hardening techniques are used to try thwart cryptanalysis attacks. Two common examples include Balancing and Salting.

These techniques are based on the fact that attacks on balanced BFs, ie BFs with constant Hamming weights, are harder to attack.

One approach is to concatenate a BF , of size \(m\) say, with a negated copy of its self (ie flipping all the bits, so \(1\)‘s become \(0\)‘s and vice versa), thus resulting in a new BF of length \(2m\). Privacy is further improved by then permuting all the \(2m\) bits. The resulting BF will have a uniform Hamming weight as now half of the bits are set to \(1\). The compromise is that memory requirements and computing time are increased.

Let’s illustrate this via an example. Consider the below BF, of length \(4\): 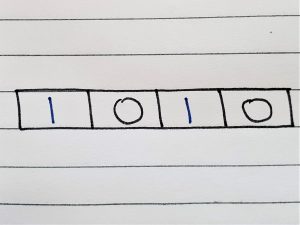 To balance this BF, we  want to concatenate it with a negated copy of itself, ie 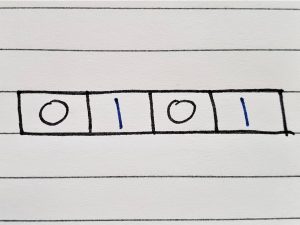 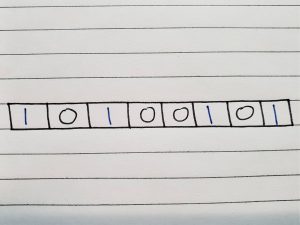 Finally, the resulting BF is randomly permuted, and for example, now looks like this: 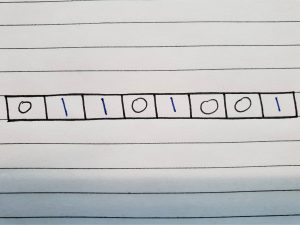 These techniques add extra string values to each \(q\)-gram before hashing. The idea is to reduce the frequency relative to unsalted values.

For example, let’s say we wanted to hash the names of two people, who both happen to be called “fred”. If we just went ahead, and generated \(q\)-grams as normal, they’d both be hashed to the same bit positions by the BF encoding process. What we can do instead, for instance, is add the salting value of Age to each \(q\)-gram before hashing, so that they’ll be hashed to different bit positions instead.

For instance, the bigrams of two “fred’s”, with different ages, may look something like this:

This results in the frequency of “fred’s” bigrams being reduced, hence helping thwart frequency attacks on bigrams that may otherwise frequently occur.

Hardening is an interesting and ever-growing area of research in the field of BFs, as the limits of their security are tested…