I’ve been lucky enough to have worked on many interesting and challenging projects throughout my career, especially in the space of detecting “bad” people.

As one can imagine, much focus is placed on detecting persons of interest in the government sector. After all, you can’t ensure national security, for instance, without being able to detect behaviours and profiles of those that mean to create harm.

What you soon realise in this domain is the fact that most of these “baddies” work as part of a network, and detecting those networks is anything but trivial. Picking out one bad person can often be relatively easy, but surfacing the entire network they’re connected to can be a very challenging problem.

To enable detection of such networks, we often must turn to the field of graph analytics, also known as network analysis. It allows us to efficiently solve specific classes of problems that have data arranged in a certain way.

It has far reaching applications, such as in fraud detection, social network analysis, and in physical environments, such as power grids.

Graph analytics is based on a fundamentally important area of mathematics known as Graph Theory.

The Theory of Graphs

In this context, graphs are defined as mathematical structures used to study pairwise relationships between objects and entities.

Nodes typically represent people, organisations or cities, and the edges represent relationships between nodes, such as transfer of funds, or person \(A\) is related to person \(B\).

Here’s a simple graph showing the transfer of money between some friends, for instance: 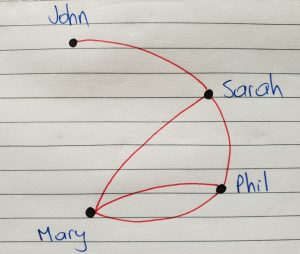 Below is a list of the vertices and edges of the graph:

In order to fully appreciate graph theory, it’s worth stepping back in time and. see where it all started…

The Seven Bridges of Königsberg

The city of Königsberg in Prussia, which is now known as Kaliningrad (Russia), was the topic of a famous mathematical puzzle in the early 18th century. 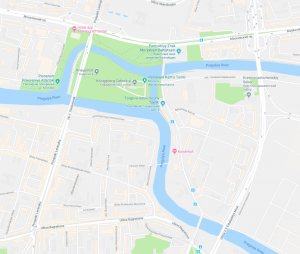 At the time, there were seven bridges connecting two large islands surrounded by the Pregolya river, along with two portions of mainland divided by the river.

Below is a diagrammatic view of the seven bridges: 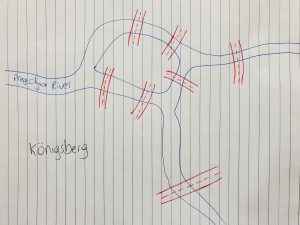 The problem posed was how could one traverse the city of Königsberg by crossing all seven bridges only once?

Remember, this was during the time before GPS, before the internet even, and even before graph theory existed!

What you’ll soon realise is that it’s impossible to do. It was Leonhard Euler who managed to prove it, and with that proof, graph theory was born.

In order to solve the problem, Euler converted the bridges and graphs into  what we now know as a graph: 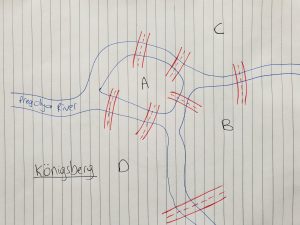 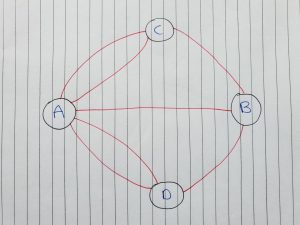 This representation should now look familiar, with vertices and edges. 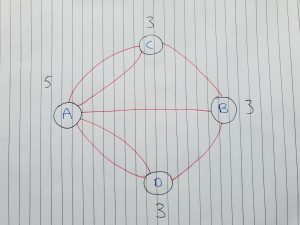 In the Königsberg case, no such path exists as we do not have exactly two vertices of odd degree (we have four) and nor are all the vertices of even degree, as all four vertices are in fact of odd degree.

Further details on Euler graphs can be found here.

The Structure of Graphs

There’s an important distinction between graphs; they can be either directed or undirected.

The distinction lies in whether or not the edges have a direction.

If we consider our first example, of a group of four friends transferring money to one another, then we can see that the graph is in fact directed, as John sending money to Sarah, for instance, doesn’t mean that Sarah is sending any money to John: 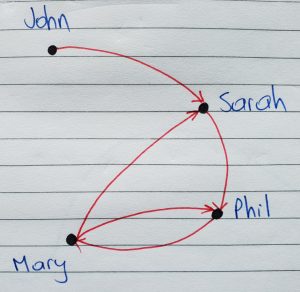 Graphs can also be either connected or disconnected:

A weighted graph is one where each edge is assigned a weight. For instance, weights can represent the value or amount of transactions between people, where high values/numbers can potentially indicate money laundering in the use case of financial crime.

Below are some common definitions:

Some examples of the types of analysis that can be performed on graphs includes:

Graphs provide an efficient way to solve various classes of problems, especially ones that involve interactions and relationships. They have the great advantage of offering an intuitive and visual way to represent and tackle such problems.

Graph databases, such as Neo4J, are important alternatives to traditional relational databases, for storing such information, such as relationships between people.

They also offer computational efficiency for some algorithms when data can be arranged in a graph structure as opposed to tabular format.

One very interesting applications of graph analytics is to the area of Entity Resolution. This involves resolving different representations of the same entity (ie individual, organisation etc) across disparate data holdings.  The use of graph analytics enables relational similarity between entities to be used, beyond just string similarity of attributes, that is traditionally used in entity resolution.