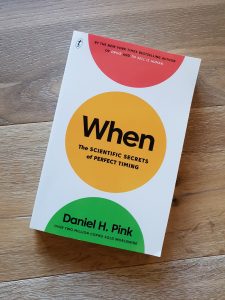 “This book is about timing. We all know that timing is everything. Trouble is, we don’t know much about about timing itself”

This is an interesting read about the best times of day to make optimum decisions.

These timings are based on whether you’re a ‘Lark’, ‘Owl’ or ‘Third Bird’, which inform your ‘peak-trough-rebound’ schedule, that are based on your sleep/peak cognitive periods, and when you should make certain decisions.

For most people, their best work is done in the mornings, when they find it easiest to concentrate, which is followed by a less productive period in the afternoons, before a late afternoon burst before dinner.

Examples of optimised timing include: